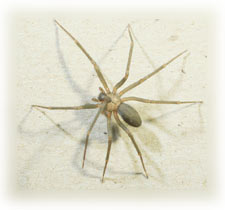 Brown recluse spiders belong to a group of spiders commonly known as violin spiders or fiddlebacks. This is because of a characteristic fiddle-shaped pattern they have on their head region. The spider is golden brown with the fiddle being dark brown or black. This spider is not hairy and the fiddle pattern is often shiny. They are about 1/4 to 3/4 inch long. Members of this small family are known for their poisonous venom. They have six eyes in three pairs. The cephalothorax is rather flat above and has a conspicuous, lengthwise furrow in the midline at the rear third. Each foot has two claws. Many of the wolf spiders are similar in appearance and have similar markings as the brown recluse. They are large, robust, hairy, and therefore they can be distinguished from the brown recluse.

Brown Recluse spiders spin small, irregular webs under bark, stones or other secluded areas. Their venom is especially poisonous to people; those bitten often become ill and find that the wound does not heal quickly. Both male and female brown recluse spiders, as well as their spiderlings, are capable of injecting venom which may result in serious lesion formation or systemic reactions. The severity of the bite may vary. The symptoms may vary from no harm at all to a reaction that is quite severe. Usually, the brown recluse spider bite is not felt and the pain sets in from six to eight hours later. A typical bite area may resemble a pimple, postule or blister formation within six to 12 hours later. Mild to severe pain accompanied by swelling may occur during this interval. The surrounding tissue begins to darken, is irregular in shape with sharply raised edges resulting in a sunken area which may be several centimeters in diameter. Often there is a systemic reaction within 24-36 hours characterized by restlessness, fever, chills, nausea, weakness, and joint pain. Where the bite occurs there is often tissue death and skin is sloughed off. In some severe cases, a wound may develop that lasts several months. In all cases, a physician should be notified. If at all possible, kill and take the spider to the physician for positive identification. Individual spiders can be crushed underfoot or sprayed with an aerosol spray.

Brown recluse spiders are found primarily in the Midwest. Many cases of bites are reported from Alabama, Florida, Georgia, Texas, Kansas, Missouri, and Oklahoma. They are suspected of being in other states as well. The edge of its range just reaches the tip of western Virginia, but it occurs rarely in this state. The spider commonly lives in basements, attics and garages of houses and often hides behind boards and boxes. Bites often occur when the spiders hide in towels or old clothes left in those areas. The Brown Recluse has adapted quite well to indoor habitats. They are commonly found in the storage areas of residences, including areas such as attics, closets, bedrooms and other dark recesses. This spider frequently inhabits clothing, toys, books, boxes, furniture as well as transport trucks, tool sheds, tree houses and little used or abandoned dog houses.

The brown recluse spider is nocturnal and prefers food such as firebrats, crickets, cockroaches and other soft bodied creatures. Earning their name well, the brown recluse spider ceases its wanderings at first light. People are most commonly bitten in bed, while changing clothes, or cleaning storage areas. Not only will this spider hide in cracks and crevices of the home, they will often climb into clothing or shoes that someone has laid out to wear the following day.

A female deposits eggs in off-white silken cases about 1/3 inch in diameter in sheltered, dark areas. Spiderlings emerge in 24-36 days and abandon the egg case. Development is slow, influenced by weather conditions and food availability. They reach maturity in 10 to 12 months and can survive long periods of time without food or water. Immature spiderlings resemble adult brown recluse spiders but have lighter coloration. Adult males and females will vary from light tan to dark brown. 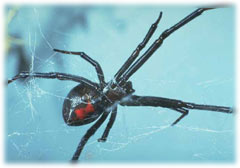 The male black widow's abdomen is more elongate than that of the female, with white and red markings on its sides. The female's abdomen is almost spherical, usually with a red hourglass mark below or with 2 transverse red marks separated by black. The legs of the male are much longer in proportion to his body than that of the female. The female is the most easily recognized, her shiny black body giving great contrast to the red hourglass marking on her round abdomen.

The black widow's range is from Massachusetts to Florida and west to California, Texas, Oklahoma and Kansas. Although they can be found in almost every state (and some portions of Canada), this spider is most common in the Southern locales of the United States. Black widow spiders are common around wood piles, and are frequently encountered when homeowners carry firewood into the house. Also found under eaves, in boxes, underneath unused construction materials, inside wooden toy boxes, firewood boxes, outdoor toilets, meter boxes, and other unbothered places.

The female black widow spider rarely leaves her web. The web she constructs is an irregular, tangled, criss-cross web of rather coarse silk. The core of the web is almost funnel shaped, woven into a silken tunnel in which the female spider spends the majority of her daylight hours. This web is altered and rebuilt in a regular basis and is capable of capturing rather large insects. The female wraps any captured prey with her silk, repeatedly turning her victim with her legs as she applies more silk. After her victim is covered in silk, the spider kills her prey by injecting her venom. The prey might be eaten immediately or reserved for a later feeding. After the prey is fed upon and the body fluids are sucked from the victim, the carcass is cut loose and allowed to drop to the ground. The female black widow is most often found hanging upside down in her web, where she spends most of her daytime hours. She stays close to her egg mass, defensively biting anything that disturbs her or her egg sac. After laying her eggs, the female black widow is hungry and more likely to bite a human. The female black widow stores sperm, producing more egg sacs without mating. Some females live more than three years.

Egg sacs are pear shaped (or oval), brown, papery and about ½ inch long. They hold from 25 to 900 or more eggs, which have an incubation period of 20 days. The spiderlings disperse shortly after emerging, tearing an opening in the egg sac and stay near the sac. After several hours, these second instar spiderlings balloon to the ground and scatter. Growth requires two to three months, with older females dying in autumn after egg laying.

Of all spiders, the Black Widow is the most feared. The female's venom is especially poisonous to people. Despite its reputation, this spider often attempts to escape rather than bite, unless it is guarding an egg mass or if it is cornered and pressed. The male black widow will not bite you. After mating, the female sometimes eats the male (remember, she only has to mate once in her life), earning the name "widow." During the period shortly following mating and laying of eggs, the female black widow can be a little cranky and hungry. After this period (if he lives through it!) the male lives quite comfortably, eating prey captured by the female. The development of his venom sacs stop and become inactive as the male matures, thus making him less of a potential problem than his female counterpart.

The bite of the female black widow spider may not always be felt at first and besides slight local swelling, there is usually little evidence of a lesion. Two tiny red spots can sometimes be observed in the center of the swollen area. Most of the time, pain at the site of the bite occurs immediately and becomes most intense after about three hours. An overall aching of the body, especially the legs, are common reactions. Headache, elevated blood pressure, nausea and profuse perspiration may occur in severe cases. The condition is self-limiting and in most cases symptoms disappear in two or three days. Calcium gluconate is used intravenously to relieve and relax muscle spasms produced by black widow venom.

Be very careful when working around areas where black widow spiders may be established. Take proper precautions, wear gloves and pay attention to where you are working. Black widow bites are sharp and painful, and the victim should go to the doctor immediately for treatment. 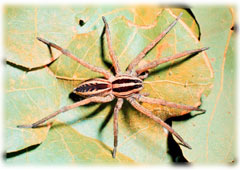 Wolf Spiders are large, hairy spiders that hunt for their prey by running it down and capturing it. Although VERY scary they are harmless and can be ignored. 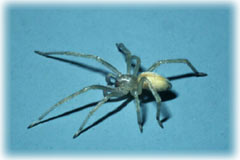 Sac Spiders are very small spiders with irregular webs and small egg sacs. These spiders are poisonous and should not be allowed to multiply inside the home.