Don't Let Your Home Be On The Termite Dinner Table

Knowing that termites serve an important purpose on Earth, breaking down dead wood to make room for new growth, won't take a dime off the $800 or $1,500 bill to rid your house of them. But maybe it will ease the sting out a bit.

Humans have been fighting nature since the dawn of time, damming up rivers, clearing pathways through forests and hunting animals for food. Our fight against termites is simply the modern equivalent of wanting to have things our own way.Termites eat very slowly, perhaps a two-foot length of 2-inch-thick board in a year, according to David Hinson, manager of Servall, one of Clarksville's largest pest-control companies.

"If you call for a termite inspection and they say, 'Yes, you have termites,' your house isn't going to fall down this afternoon," Hinson said.

You can safely, effectively kill termites that are damaging your house. And if they haven't gotten to your house yet, it's possible that a combination of chemical barriers and a few do-it-yourself preventive measures can keep you termite-free for good.

Hinson said the most prevalent misconception about termites is that they live in your house. In fact, the termites in our area live in huge underground colonies.

Too many people think that if they kill the termites they see, they're in the clear, Hinson said.

"You can't just find a wad of termites, kill them and be done with them," he said. "It's not like finding a nest of wasps --you spray the nest and they're gone."

For every termite you see, thousands more live underground. Termite colonies send workers to find food. Even when a food source is identified, the search continues.

"It doesn't matter what they've got," Hinson said. "They're always looking."

Worker termites randomly, continuously forage for food. Workers find wood, or any wood product, like paper or particleboard, and deliver it in pieces back to the underground colony. Because they need moisture and protection from light to survive, the workers build mud tunnels through which they travel to and from food. If they find their way into your floor joists or plywood framing, they will continue to eat from it for as long as you allow, because your home is a reliable food source.

For many years, chemical barriers, which either killed or repelled termites, were the only big guns available against termites. But barrier systems are not failsafe. Since 1995, with the introduction of Sentricon, homeowners have a new weapon in the fight. Sentricon and other baiting systems rely upon the placement of termite food, usually small pieces of wood, at regular intervals around the perimeter of the house. Pest control technicians return monthly or quarterly to monitor the bait. If they find evidence that termites are snacking there, they replace the wood with a stick of termiticide. The worker termites carry the lethal "food" back to the colony, and soon the entire colony is killed.

Although you can look for signs of termite infestation yourself, the easiest way to stay on top of the threat is to have a professional inspection.

"Have it checked at least once a year is usually a good rule of thumb," said Mike Lyons, owner of Lyons Pest Control.

Lyons said he does numerous free termite inspections every week. About one out of three houses he inspects have a termite problem, he said.

Although using professional termiticides is often necessary despite prevention efforts, homeowners can do several things to lessen their chances of being the next house on the block infested with termites. According to Mike Potter, extension entomologist for the University of Kentucky College of Agriculture, homeowners can reduce the risk of termite attack by following these suggestions: 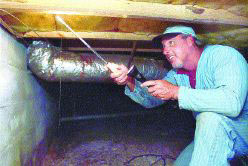